‘4 Cages?! She must have dozens of hamsters!’ you exclaim.

Nope, only 4. We had 3 large rotastak cages connected by all manner of princess pink tubing when we brought home these adorable, beady eyed sisters. It was more than enough space and they were already used to cohabiting so what could possibly go wrong?

Russian Dwarf Hamsters are tiny, pink toed, waffly nosed psychopaths. That’s what went wrong. They hate each other so much that they could pick a fight with a mirror if it looked at them wrong! 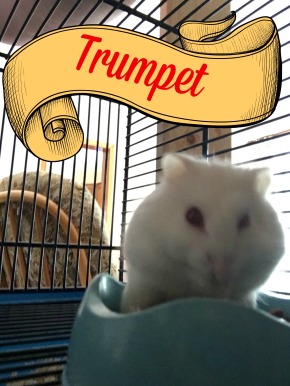 Formerly the smallest sister and the only albino in the litter, her sisters picked on her so much in the first 24 hours of bringing them home that she was bleeding and we had to relocate her to her very own cage.
Now she’s the second largest, loves to have a cuddle or otherwise spend every waking hour on her wheel – we got her one of those saucer wheels which is great fun when it stops suddenly and she goes flying off the side.
Either through design or injury, her hind legs don’t work very well (she’s in no pain and it doesn’t hinder her in the least) so all of her wheel running means she has hilariously hench shoulders and forelegs, with spindly little hind legs bringing up the rear.

With her sweet little ‘who the fuck are you and what do you want?’ face, it’s impossible not to love Crumpet. Sure, we can’t pick her up but she’s calmed down a lot since she came out a week after her arrival home, she’ll eat from my hand and will hop into her ball for a stroll from time to time.

She got her own emergency house on Christmas eve when she was being bullied by her sister, local buy/sell pages on Facebook really are the best – 2 cages for £10!

My fluffy, chubby little favourite. This one will climb up the door of her cage so you can put your hand in for her to floomp down into and just hang out for a bit. She was the second out of the main cage, being picked on by her other 2 sisters – she has probably thrived the most since living solo and is just the cutest thing that ever walked the earth.

Now for the last sister. The reason we spent over £100 on pages and extra bedding for what’s supposed to be the cheapest and easiest to care for pet in the world… instigator of the Battle Royale…

Don’t get me wrong, she’s not aggressive with people and she’s as cute as any of her sisters but FFS, this hamster has been a massive ballache.

She picked on her sisters, who have since outgrown her and managed to escape one day and vanish for 3 days. I put out little piles of food and water sources so that she wouldn’t die on her adventure, then found her happily living INSIDE my inflatable mattress which will, funnily enough, never inflate again.

Later on, we discovered she’d also ripped up little bits of the carpet to turn into bedding – so that’s on my list of things to fix!

Arse has certainly lived up to her name but I’m a little bit worried about her at the moment as she hasn’t been drinking during the heatwave and she’s lost some weight – so she’s under observation and being fed melty icecubes and cool treats until she’s out of the woods. So far so good, but she likes to keep us on our toes!

You’re now officially introduced to the fluffiest Most Sublime clan members – do you have any pets to introduce?

One thought on “Meet the Team”