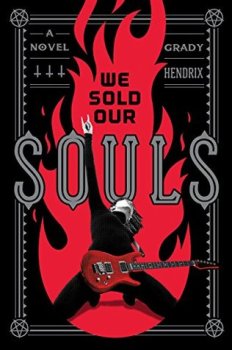 A new novel of supernatural horror (and pop culture) from the author of Horrorstor, My Best Friend’s Exorcism, and Paperbacks from Hell.

In the 1990s, heavy metal band Dürt Würk was poised for breakout success — but then lead singer Terry Hunt embarked on a solo career and rocketed to stardom as Koffin, leaving his fellow bandmates to rot in rural Pennsylvania.

Two decades later, former guitarist Kris Pulaski works as the night manager of a Best Western – she’s tired, broke, and unhappy. Everything changes when she discovers a shocking secret from her heavy metal past: Turns out that Terry’s meteoric rise to success may have come at the price of Kris’s very soul.

This revelation prompts Kris to hit the road, reunite with the rest of her bandmates, and confront the man who ruined her life. It’s a journey that will take her from the Pennsylvania rust belt to a Satanic rehab center and finally to a Las Vegas music festival that’s darker than any Mordor Tolkien could imagine. A furious power ballad about never giving up, even in the face of overwhelming odds, We Sold Our Souls is an epic journey into the heart of a conspiracy-crazed, paranoid country that seems to have lost its very soul…where only a girl with a guitar can save us all.

I didn’t enjoy this book as much as I thought I would, I was never deep in the heavy metal/rock music culture back in the day so a lot of the feeling in this book went right over my head. The overriding message seemed to be that music was better when it was written by starving artists rather than teams of people (arguably true!) and anyone who enjoys the latter is a mindless sheep and a worthless cog in a larger machine of depressingness.

This book is a tribute to hardcore fans of classic rock, it’ll strike all the right chords with them (pun utterly intended) and give them a big ol’ bear hug made of nostalgia. I’m gutted that I’m not the target audience for this book because I LOVED Horrorstor by this author and really wanted to love this book too.

Hendrix’ books tend to be heavy on the niche interests and this one is no different, so be warned if you pick this up!

I found it a tough read and a bit ‘meh’ when it came to holding my attention for the reasons I’ve already mentioned. The early pacing in the book is slow but around the halfway mark all of the loose threads start to weave together and everyone meets up for the grand finale.

There’s some occasional and unflinching violence and gore in this book so it’s just about the social commentary, the violence and the amped up feeling of paranoia as the narrative progressed were the real highlights for me.

7 thoughts on “We Sold Our Souls by Grady Hendrix”