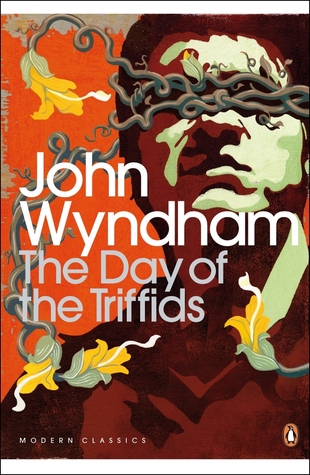 Bill Masen, bandages over his wounded eyes, misses the most spectacular meteorite shower England has ever seen. Removing his bandages the next morning, he finds masses of sightless people wandering the city. He soon meets Josella, another lucky person who has retained her sight, and together they leave the city, aware that the safe, familiar world they knew a mere twenty-four hours before is gone forever.

But to survive in this post-apocalyptic world, one must survive the Triffids, strange plants that years before began appearing all over the world. The Triffids can grow to over seven feet tall, pull their roots from the ground to walk, and kill a man with one quick lash of their poisonous stingers. With society in shambles, they are now poised to prey on humankind. Wyndham chillingly anticipates bio-warfare and mass destruction, fifty years before their realization, in this prescient account of Cold War paranoia.

There’s definitely a reason a this book is considered a classic.

I was already biased in favour of this book for a couple of reasons;

Down to the nitty gritty, I loved this story because the science in it was timeless (unlike ‘I Am Legend’ which upset my inner biology geek). The author postulated various reasons to account for most of the world’s population had gone blind and also why the angry cabbages where roaming the countryside and eating people once they’d cleared out the cities.

I liked the fact that the plants weren’t inherently evil or anthropomorphosised (a word that I never get to use, because I can’t actually say it out loud in one go), they were just carnivorous plants going about their business. The very end even suggests that the cause of the blinding light involved a man-made sattelite. That really appealed to me because contrary to most modern sci-fi where it would be some nefarious plan cooked up by the angry cabbages, rather than humanity shot itself in the foot (or in the eyes, in this case) and the plants are just clearing up the mess they left behind. Given that these plants are super intelligent and can communicate with each other, it seems extra fitting that they should knock some people off after they’ve been kept in what amounts to prison camps and had bits of them cut off to make them harmless.

The book follows the progress of Bill, a bloke who managed to make it through the blinding event intact. He then witnesses the aftermath and struggles to rebuild his own little corner of civilisation with the help of some people he meets along the way. Being a proper Brit, he does spend an unsurprising amount of time either drunk or in a pub.
I can’t really refer to it as the fall or rise of civilisation, it just changes and we get to see some very human reactions to what has happened to the world- for better or worse.

This book is a timeless classic and one I will definitely be reading again in a few years time, I’m a little disappointed that it doesn’t seem to be on the school syllabus any more so it may yet drift into osbcurity.

It’s pretty short too, so I would recommend reading this book if you have a few hours to kill.

“When a day that you happen to know is Wednesday starts off by sounding like Sunday, there is something seriously wrong somewhere.”
― John Wyndham, The Day of the Triffids

2 thoughts on “Review: The Day of the Triffids by John Wyndham”