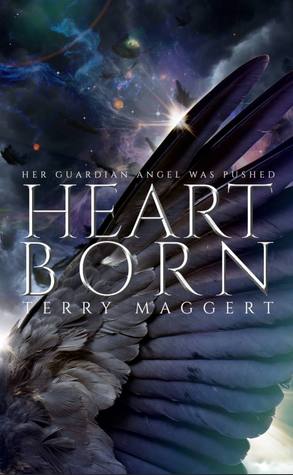 Her guardian angel was pushed.

Keiron was never meant to be anything other than a hero. Born high above in a place of war and deception, he is Heartborn, a being of purity and goodness in a place where violence and deceit are just around every corner.

His disappearance will spark a war he cannot see, for Keiron has pierced the light of days to save a girl he has never met, for reasons he cannot understand. Livvy Foster is seventeen, brave, and broken. With half a heart, she bears the scars of a lifetime of pain and little hope of survival.

In the middle of a brewing war and Livvy’s failing heart, Keiron will risk everything for Livvy, because a Heartborn’s life can only end in one way: Sacrifice.

Fall with Livvy and Keiron as they seek the truth about her heart, and his power, and what it means to love someone who will give their very life to save you.

Due for release on the 1st of September 2016

YA isn’t usually my area but I was more than happy to make an exception for Terry Maggert – his Halfway Witchy series is a staple on my comfort reading list and I’m pretty sure I could read and enjoy anything he could possibly come up with.

Keiron is an angel, or something very similar. He’s from a city in a different time and place from the world as we know it, inhabited by angels, a corrupt government system and strong political families. When he takes the plunge to the world below, he leaves behind his wings and sets out to change the life of a girl who hasn’t yet lived hers fully.
I think I would have preferred to have read a little more about Keiron’s character and his backstory but I’m keeping everything crossed for a sequel so I may yet get my chance!

Livvy is a lovely, brave girl who is waiting for a heart transplant to bring her a new life but for now she’s struggling through with her every day. When she meets Keiron for the first time, she suddenly makes a connection and feels that maybe there is more out there for her.

The chapters alternate between telling Livvy’s story and that of the Sliver, the world of the angels. The Sliver was an excellent concept, a mixture of classical and magical, with just enough description to let your imagination fill in the gaps.
I particularly enjoyed the battles and politics being waged in the world of the angels while Livvy’s story is unfolding below, the world included a class system and some kickass gladiator style fights between the corrupt government and their opposition.

It definitely is a YA novel though, so bear that in mind when you get stuck in – it does have teen hand holding and your mandatory mean girls! If you’re looking for the new teen fantasy book, this is definitely it – I can only hope that there’ll be more to come from these characters to take us into battle with the angels.