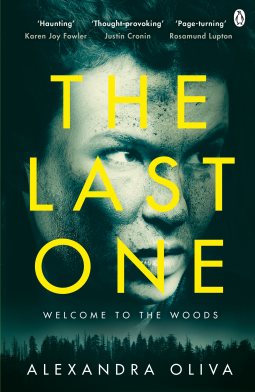 Survival is the name of the game as the line blurs between reality TV and reality itself in Alexandra Oliva’s fast-paced novel of suspense.

She wanted an adventure. She never imagined it would go this far.

It begins with a reality TV show. Twelve contestants are sent into the woods to face challenges that will test the limits of their endurance. While they are out there, something terrible happens—but how widespread is the destruction, and has it occurred naturally or is it human-made? Cut off from society, the contestants know nothing of it. When one of them—a young woman the show’s producers call Zoo—stumbles across the devastation, she can imagine only that it is part of the game.

Alone and disoriented, Zoo is heavy with doubt regarding the life—and husband—she left behind, but she refuses to quit. Staggering countless miles across unfamiliar territory, Zoo must summon all her survival skills—and learn new ones as she goes.

But as her emotional and physical reserves dwindle, she grasps that the real world might have been altered in terrifying ways—and her ability to parse the charade will be either her triumph or her undoing.

Sophisticated and provocative, The Last One is a novel that forces us to confront the role that media plays in our perception of what is real: how readily we cast our judgments, how easily we are manipulated.

This book blew my mind. What an amazing premise!

Contestants taking part on a wilderness survival reality TV show are out facing challenges during filming while the world is taken over by a pandemic that kills off almost the entire population. having missed the media coverage of this catastrophe, Zoo has to figure out where the artifice of the show ends and her new horrifying reality begins.

The style of writing is very unique in this book, the tone is very detached as though we were the viewers of this reality show and can only watch what the contestants do without any context to their personalities or motivations. It’s a take on the unreliable narrator trope as we can only rely on Zoo, the main character, to tell us what she understands of each situation and as the book goes on it becomes clear that she’s missing a lot.
The chapters alternate between Zoo’s present after the world has already gone to hell, and earlier times when the show was still being filmed and all of the signs that the world was going to end this way. They complement each other perfectly and you don’t feel that you’re getting too much of one over the other, both timelines are utterly enthralling and made me really pissy to have to close my book after my lunch break was over. Really pissy.

Zoo is a great character to lead this story, on one hand she’s really relateable and confides some of her deepest thoughts through her narration which makes you feel a close connection while on the other hand, she does some pretty questionable things in the course of events to try to keep herself sane.

The book ended in such a way that I can imagine there being a sequel but I’d beg of the author to write the story from the perspective of another contestant rather than continue Zoo’s story (or as well as, I’m not that picky!) – personally, I’m a fan of survival stories directly after the disaster rather than the rebuilding stuff.

I can’t really think of another book to compare this with, but it’s a dystopian survival story which I think would appeal more to older readers (rather than YA) to fully appreciate the main character.