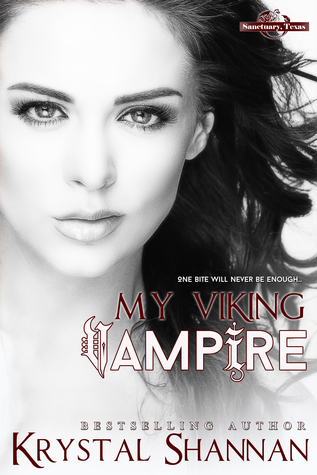 Bailey Ross’ world is crumbling around her. Her abusive ex, a human, is closing in on her again, and to make matters worse, a new enemy, a djinn, is stalking her. This supernatural being takes great pleasure in human pain, something Bailey has in excess thanks to her ex. If she’s caught by either, she’s as good as dead.

Backed into a corner and desperate to escape, she does something she swore wouldn’t ever be possible again –trusting a man. And he’s a vampire.

Protection via the sexy vampire Erick Thorson may prove to be a little more than she bargained for. Sparks fly between them and she finds herself agreeing to more than just protection. Though he has promised not to let anyone harm her, the small west Texas town is more than it seems and he may not be able to make good on his vow no matter how hard he tries.

Will Sanctuary be the home Bailey longs for or will she have to die to find out?

The literary equivalent of popcorn – this book is fluffy, light, delicious, contains little to no nutritional value and like popcorn: I NEED MORE.

This book was a compulsive read, I read it cover to cover within a couple of hours and then shook it upside down to see if any more crumbs of vampiric deliciousness would fall out.

The beginning of this book made me chuckle, there was very little preamble as our main characters are thrown together and their story together begins. By ‘very little’, I mean there was almost no scene setting at all so it does take a few minutes to piece together what’s going on and accept there wouldn’t be any satisfactory explanation.

It works out OK though, we get the barest hint of backstory and then join Bailey and Erick on the bus to Sanctuary, a small town inhabited by supernatural creatures who have joined together to form a new society. Of course, there’s romance, prophecy and magic to follow.
I love meeting loads of characters with a variety of supernatural powers, it’s my catnip to see what magical powers and paranormal beasties authors have picked out of their imagination to use.

Bailey isn’t the strongest of strong female leads, she puts up a token fight but ultimately allows the new menfolk in her acquaintance to take charge of the situation and protect her. The only reason that this doesn’t drive me insane is because the men in question aren’t strictly human and have several centuries on her.

This book is the first in a series, it looks like the following books will be following different characters in the town of Sanctuary rather than focusing on the same characters. Seeing as there’s an abundance of supernatural hotties in the town, some of whom run a kink club, there will be plenty of opportunities for more sexytimes and love stories!

This genre of books is one of my greatest vices, I could just live off the stuff and can’t stop myself from collecting free copies from my daily BookBub emails.

If you’re looking for a series to fill the void left by Charlaine Harris’ Sookie Stackhouse series, this might be a good place to start.