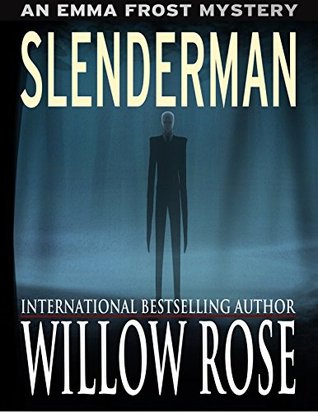 Ever heard of Slender Man?

Some say he is an online myth; others will go very far to prove he is real, so far that they might even kill for him.

Fanoe Island is busy with the mayoral election coming up, when suddenly, the sitting mayor is found killed. Rumors tell that a faceless man dressed in a suit and tie did it.

In Emma Frost’s house that she inherited from her grandmother, a box of letters is found that tells a story from a long time ago. A terrifying story revealing a painful chapter in the life of her own family half a century ago.

I picked this book up because Slenderman fascinates me and I’m ready to learn more about the incredible phenomenon which is the suited monster. Sadly, this book probably wasn’t the best starting point as it isn’t a supernatural thriller at all but a standard murder mystery – even looking at the synopsis after reading this book I think it’s pretty misleading.

This book is a part of the Emma Frost series and does have a character from a previous installment of the series, I’m not sure if the extra context would have helped, but without it the story was ridiculous.

None of the characters in this book are likable, most of them are stereotypes and the rest are just arseholes. The main character has been exposed for hacking into police files and stealing information, and though she whines that she thinks it’s ok because she was doing it to solve crimes – being punished for hacking seems pretty reasonable to me!

What I did enjoy about this book was how it illustrated how little parents know of their children’s online lives and how teenagers can be groomed by strangers who know how to play on their sense of being misunderstood. It’s just a shame that the stranger in question was an entirely unbelievable culprit in both motive and capability.

If the book hadn’t already lost me with it’s stilted dialogue and terrible characters, it was the portrayal of autism that finally pushed me over the edge.
The main character’s son has autism and this apparently automatically gifts him with computer genius despite never having touched a computer before, he is also able to apparently read the dog’s mind. I think this bothers me most because she couldn’t just let him be a little boy with autism, she had to ‘compensate’ him with special abilities.

This wouldn’t have bothered me as much before, but I recently saw these videos on Facebook which got me thinking:

Her second big boo-boo that sealed the deal for me was that she made the main villain autistic following a head injury (statistically VERY unlikely) and also gifted him with amazing computing abilities. Sorry, but that’s just silly.

Some of the ideas in this book were really good, but I think the writing style and dialogue didn’t do it any justice. Then again, maybe I’m just biased because I was hoping for a book with a brutal supernatural killer…

One thought on “Slenderman (Emma Frost #9) by Willow Rose”