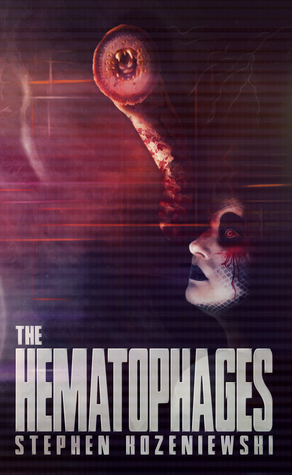 Doctoral student Paige Ambroziak is a “station bunny” – she’s never set foot off the deep space outpost where she grew up. But when she’s offered a small fortune to join a clandestine salvage mission, she jumps at the chance to leave the cutthroat world of academia behind.

Paige is convinced she’s been enlisted to find the legendary Manifest Destiny, a long-lost colonization vessel from an era before the corporations ruled Earth and its colonies. Whatever she’s looking for, though, rests in the blood-like seas of a planet-sized organism called a fleshworld.

Dangers abound for Paige and her shipmates. Flying outside charted space means competing corporations can shoot them on sight rather than respect their salvage rights. The area is also crawling with pirates like the ghoulish skin-wrappers, known for murdering anyone they can’t extort.

But the greatest threat to Paige’s mission is the nauseating alien parasites which infest the fleshworld. These lamprey-like monstrosities are used to swimming freely in an ocean of blood, and will happily spill a new one from the veins of the outsiders who have tainted their home. In just a few short, bone-chilling hours Paige learns that there are no limits to the depravity and violence of the grotesque nightmares known as…THE HEMATOPHAGES.

Stephen Kozeniewski gives another big ‘fuck you’ to anyone demanding him to settle down and pick a genre, and I couldn’t be happier!

So far, his books have ranged between zombies, vampires, a clone society and dystopian civil war – this one is about evil space leeches.

Kozeniewski adds his usual light touch in the social commentary in his world building – humanity has screwed its way across the cosmos, now populating several planets and space stations. Instead of nations, humanity is now divided by the companies that they work for and everything is done with the bottom-line in mind.

What I love most about this kind of world building is that it sets the scene for the story, but they’re not central to the story they just are. There’s no ranting and raving by the author to make you listen to his world view, he just throws in a few tidbits and then gets on with telling another amazing story. This book manages to be stomach churningly gory, but by stimulating the imagination rather than through graphic description.

Ambroziak is a brutally ambitious scientist who has been offered the opportunity of a lifetime to set the trajectory of her career. She joins a mission to recover the Manifest Destiny,  a vanished ship with all the celebrity of the Titanic , but a couple of things stand in her way. Namely, space pirates and evil leeches.

Space pirates, captained by the best literary character of all time: Nia.
That’s right! There’s finally a ‘Nia’ in an English language book!!
There pirates aren’t your usual swashbucklers, they’re like a combination between Firefly’s Reavers and something even worse. For me, the horror started when the pirates arrived, their physical appearance was nasty enough but their back story is even worse.

Once our intrepid explorers have landed on the blood planet, the story shifts tone and becomes more claustrophobic and genuinely terrifying. I’m a sucker (pun intended) for alien parasites and horror mixed with sci-fi, Kozeniewski managed to gather all of my favourite things, wrap them up in a writing style I adore and advertise it on Facebook at a moment I was looking for a new horror read. I tend not to re-read titles (there are too many books out there in the world) but if this one should be turned into an audiobook, I see that being something I could listen to over and over again.

I couldn’t put the book down a and felt a little nauseous at times, Kozeniewski is getting more twisted as time goes by and I’m both eager and terrified to read whatever he releases next.