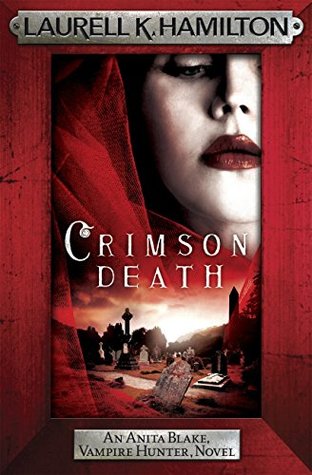 In her twenty-fifth adventure, vampire hunter and necromancer Anita Blake learns that evil is in the eye of the beholder…

Anita has never seen Damian, her vampire servant, in such a state. The rising sun doesn’t usher in the peaceful death that he desperately needs. Instead, he’s being bombarded with violent nightmares and blood sweats.

And now, with Damian at his most vulnerable, Anita needs him the most. The vampire who created him, who subjected him to centuries of torture, might be losing control, allowing rogue vampires to run wild and break one of their kind’s few strict taboos.

Some say love is a great motivator, but hatred gets the job done, too. And when Anita joins forces with her friend Edward to stop the carnage, Damian will be at their side, even if it means traveling back to the land where all his nightmares spring from…a place that couldn’t be less welcoming to a vampire, an assassin, and a necromancer.

This is the hardest rating and review I’ve ever had to do – Anita Blake books have been my staple literary diet for the past 10 years and books 1-10 would have had their bonus stars created just to show the world how much I loved them.
Obviously this has a lot to do with Anita, the heroine, being a short, grumpy and powerful woman who gets shit done. I’m at least two of these things at any given time so I identified closely with her.

This book is very much one of two parts (and not equal parts either), which is much like the more recent books in the series. The parts that I love are where she’s doing her police work and setting the world to rights, or freelancing in the monster community to make sure everyone stays safe. Sadly, these parts are now in the minority.
There was a tiny bit of this in this book, but it really was minor and Anita has definitely lost her edge where it comes to holding her own. She has more powers than ever before and she keeps making stupid mistakes and having her ass handed to her, which drove me insane.

The majority of the book was about the dynamics of her sex and romantic life. Not the fun parts, but the actual specifics of how she manages to juggle having relationships with what must be over 20 people at this point. It takes up a lot of time to explain everything and is a lot of repetition for those of us who have kept up with the series so far.
Another qualm, while I’m at it, is how cruel Anita has been to Damian – she knows that they are linked and that he needs her nearby to survive, but has utterly neglected him all the same.
I’m starting to go off Anita as a main character which is very confusing as she was my hero in my late teens, she talks a good line about being selfless and loving all of her people but her actions don’t really back that up. She fails to notice huge events in the lives of the people close to her and take stock of how they might be feeling.
Which brings me to Nathaniel, my favourite of all the characters; He is finally sick of being overlooked by everyone around him so he’s starting to push back – HALLELUIAH! Hopefully the next book will show his partners taking note of his new behaviour and treating him with the respect that he deserves.

I would like to think that I’ll just stop reading this series now it’s evolved into something I can’t get into, but in all honesty I don’t think nostalgia or curiosity about how all my favourite characters are doing will let me stop following them yet. All I can do is hope that the future books in this series are going to have Anita getting her shit together rather than swooning over everyone with beautiful eyes that crosses her path – it’s her competence and power that makes her an amazing character, not her ability to sexually satisfy an entire Circus of the Damned…