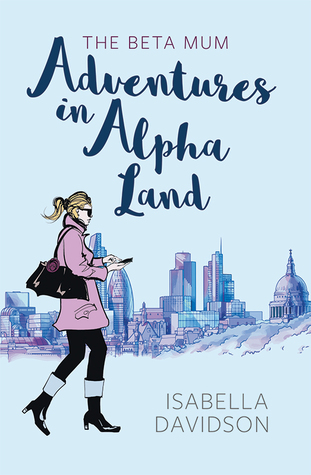 Here, it isn’t the battle of who has the Rolls-Royce of strollers…these children actually roll in Rolls-Royces!

When 33-year-old Sophie Bennett moves from a sleepy suburb of Toronto to glitzy West London, she doesn’t know where she has landed, Venus or Mars. By a stroke of good luck, her three-year-old daughter Kaya attends Cherry Blossoms Nursery, the most exclusive nursery in London – hence the world – where she meets a sea of Alpha mums: Super Successful, Super Skinny and Super Rich. There, not is all as it seems, and she has to fight against the lure of a cult, a two headed dragon and Mumsolini’s dictatorship.

When Sophie struggles to fit in and starts to feel deeply lonely, she starts an anonymous blog, The Beta Mum, dissecting the lives of the Alpha Mums, especially Kelly’s, the blonde, beautiful and bitchy class rep who constantly makes her feel like a second class citizen. When Sophie’s marriage starts to falter, she engages in an email relationship with one of her readers. But then, one of her blogs goes viral and her blog becomes more and more successful; how long will it be until they discover her true identity? Is her marriage strong enough to survive her reader’s advances? And will she ever fit in with the Alpha Mums?

This isn’t my usual genre of book, you’ll probably agree. I haven’t got any kids of my own at this point in time but I’m suddenly seeing the appeal of this mum-lit and what a way to be introduced to the genre!
This book was stunningly well written and had me hooked from the get-go. Sophie, a very ‘normal’ and middle of the road type of woman suddenly finds herself moving from her cosy home in Canada where she has a place carved for herself in the world, to the posh end of London where toddlers have tutors and bodyguards.

Understandably, she’s very lonely when she finds herself on the outside of a tribe of women she has absolutely nothing in common with. To try to ease the loneliness, she starts a blog and starts sharing some of the funny and outlandish things that these intimidating Alpha-mums do.

These Alpha-mum escapades are really entertaining to read, but there’s a tinge of alarm when you realise that there really are people out there who put this level of pressure on 3 year olds.

What I loved about this book apart from the liberally applied sense of humour, was the characters. All of them had more to them than at first glance, my favourite being that the author spent some time writing about mothers who work long hours to support their children and the horrible conflict they feel in doing so, as well as the super-driven women who have given up their work to spend more time with their children (who, let’s face it, aren’t the best conversationalists at age 3). There’s no judgement at all from the author on this point, which is nice to read.

Best yet, the protagonist isn’t a perfect mother or human being who is in a position to be judging all of these other women and they way they choose to raise their children. This book isn’t as fluffy as you’d expect from the cover and description, Sophie has some serious depth to her and is well worth following as a main character.
My only complaint is about the portrayal of her husband in this book. To me, he’s a dick. He spends all of his time working and barely even comes home to sleep and seems surprised that Sophie is unhappy with the situation. He gets angry and dismissive of her and everything she says, and she takes it with a ‘well, it is my fault’ attitude, personally I would rather this was either toned down or addressed for the deeply unhealthy relationship it is.
If you’re a chick lit fan, need a giggle or want to see how the other half live – please pick up this book! It’s opened me up to a whole new world of literature and I can’t wait to see how far down the rabbit hole I go!

One thought on “Review: The Beta Mum, Adventures in Alpha-Land by Isabella Davidson”