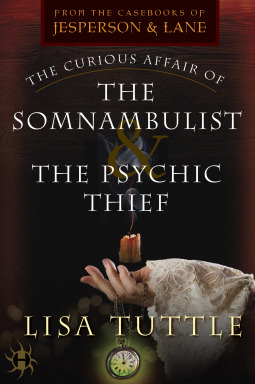 Should you find yourself in need of a discreet investigation into any sort of mystery, crime or puzzling circumstances, think of Jesperson and Lane .

For several years Miss Lane was companion, amanuensis, collaborator and friend to the lady known to the Psychical Society only as Miss X – until she discovered that Miss X was actually a fraud.

Now she works with Mr Jasper Jesperson as a consulting detective, but the cases are not as plentiful as they might be and money is getting tight – until a case that reaches across the entirety of London lands in their laps.

It concerns a somnambulist, the disappearance of several mediums, and a cat stuck up a tree . . . the links with the cat are negligible, but there is only one team that can investigate the seemingly supernatural disappearances of the psychics and defy the nefarious purpose behind them.

Jesperson and Lane, at your service.

Victorian era murder mystery, with a dash of psychic powers!
The author hasn’t quite perfected the knack of building tension, which is the only thing this book is lacking – it has everything else I could possibly want in a paranormal mystery. I think the reason for this is trying to get a balance between authentic Victorian writing style and keeping the story moving along, it was too slow paced by my liking but the writing style was perfect and whizzed me right back in time where social constraints are so charming to read about but I know I’d have been institutionalised immediately as I bore my ankle to the passing gentry.

The characters are interesting if a little underdeveloped as this book is clearly the beginning of a series and the author has things in mind for them. You immediately get a sense of something being held back, ready to be unveiled in a later installment; I only hope it isn’t going to be a romance between the two main characters.

What made this book really stand out for me was that a man and a woman were working together as equals with no sexual tension between the two, they were just perfect working partners.
The paranormal element of this book was that mediumship is a real thing and that people with psychic powers exhibit their abilities in different ways. During a time that was fascinated with spiritualism, they often found themselves able to take advantage of their gifts and step into the limelight.
It hasn’t quite hit the Agatha Christie level of perfection for me yet but I know she’s going to hit that sweet spot soon, so I look forward to the next installment!

3 thoughts on “Review: The Somnambulist and the Psychic Thief by Lisa Tuttle”