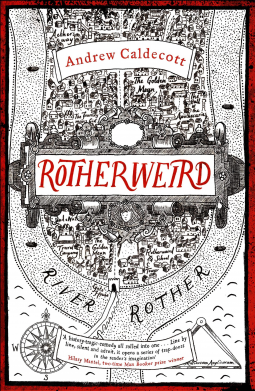 The town of Rotherweird stands alone – there are no guidebooks, despite the fascinating and diverse architectural styles cramming the narrow streets, the avant garde science and offbeat customs. Cast adrift from the rest of England by Elizabeth I, Rotherweird’s independence is subject to one disturbing condition: nobody, but nobody, studies the town or its history.

For beneath the enchanting surface lurks a secret so dark that it must never be rediscovered, still less reused.

But secrets have a way of leaking out.

Two inquisitive outsiders have arrived: Jonah Oblong, to teach modern history at Rotherweird School (nothing local and nothing before 1800), and the sinister billionaire Sir Veronal Slickstone, who has somehow got permission to renovate the town’s long-derelict Manor House.

Slickstone and Oblong, though driven by conflicting motives, both strive to connect past and present, until they and their allies are drawn into a race against time – and each other. The consequences will be lethal and apocalyptic.

I have to admit, there were times that I wasn’t sure I was going to finish this book. By the time I made it to 80% I decided to push through and make it to the end.

This book was heavy going stuff – it was really slowly paced, the author spending more time showing off his vocabulary than developing his characters. Annoyingly, the only character that I was able to connect with was the villain, which isn’t ideal when you’re supposed to be against them!

This book is set in a bizarre countryside town in the South of England and follows several characters with overly complicated and similar names as they form a network to combat the bigbad threatening their way of life. Though now I come to think of it, I’m not sure why they all felt so strongly about any of this…

My enjoyment of this book would have me giving it 2 stars but there’s that perverse side of me that gives it one extra because I know there are people out there that will love this book – someone who really enjoys books that are more of an expression of language than concise storytelling.

For me, this story didn’t live up to the thrills promised in the synopsis and the ending fell short in light of that – the quick tying up of loose ends at the end felt like being short changed.

Give me strong characters and straight-to-the-point storytelling any day! Next time I’ll be sure to check out samples of a Netgalley title rather than just going by the synopsis.