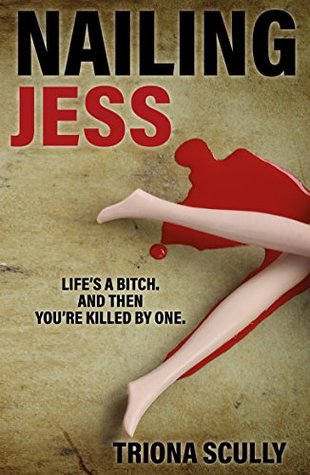 Welcome to Withering, a small town with a big problem in modern, matriarchal Britain. Here the women wear the trousers, while the men hold the handbags. Literally.

There’s a serial strangler on the loose and the bodies of teenage boys are piling up on maverick D.C.I. Jane Wayne’s patch.

Wayne needs to catch ‘The Withering Wringer’, but it’s not going to be easy. Demoted for her inappropriate behaviour, she must take orders from a man—and not just any man—an ugly one.

Still, at least she can rely on her drug stash from a recent police raid to keep her sane…

Scully’s debut novel takes classic crime and turns it on its head with a deliciously absurd comic twist.

This book was an unexpected gem – I saw it promoted on Twitter and the cover caught my eye, I would have picked it up based on the cover alone (let’s be honest, that’s exactly what I did) but the book itself was even better.

The most unique thing about this book is that all of the gender stereotypes are reversed in this book – so what would be a fairly standard (but still enjoyable) murder mystery, featuring an archaic sexist, politically incorrect police detective with a drink problem hunting down a serial killer with the help of their charming single-parenting colleague, is something extra special. Why?
The sexist detective is a woman, and the single parent colleague is a man.

Everything is exactly the same in this world except that the gender roles are reversed, the absurdity of it is what highlights the shit women experience in the patriarchal world that we actually live in. Men have to wear flat shoes to make themselves look shorter, they have to wear a pra (teeheehee, you’ll get it when you read it) and get are treated dismissively by all the women around them.
It takes a little while to get your head around it but by flipping the genders, it makes you take notice of every single little instance of sexism which you probably wouldn’t even have picked up on in a regular story because it’s all so ingrained into us to accept it.

The mystery itself doesn’t use this unique narrative device as an opportunity to get lazy – it’s suspenseful and the tension is perfect throughout. Most of all? It’s hilarious! This book doesn’t take itself too seriously, which is what makes this book so easy to read.

My only quirk with this book was the swearing was a little bit gratuitous and though I think it was a deliberate change to show a world run by women (seriously, I only just worked that out as I was considering it being a kindle format issue), the author uses the words ‘suck’ and ‘sucking’ instead of ‘fuck’. 160 sucking times. As a conoisseur of obscenities, this got on my tits.

I would love to read more books like this in different classic genres – maybe a romance where the man is swept off his feet without his consent…. or a fantasy where it’s a man who exists solely for the female hero to rescue….