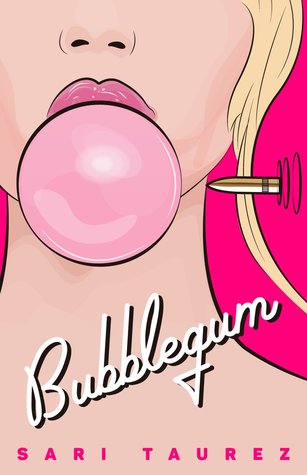 Tiana is your typical pampered young blonde with a love for expensive shoes, hot guys, and murder.

After Tiana is cut off from her family’s riches, she takes advantage of her talents and becomes a killer for hire. It’s a lucrative business in her country, where a call to the police can amount to a lifetime of debt.

Her first client: Julia, a lower-class IT genius, lesbian, and devout Catholic. When the orphanage Julia volunteers at is targeted by the infamous brothel-owner Bobby Nails, Tiana is excited to take the job. But when she discovers Bobby Nails has a full army of mercenaries at his disposal, Tiana wonders if she may be in over her head.

. Along the way they are joined by Ruby, a pyromaniac ex-prostitute who catches Julia’s eye, and William, a mysterious acrobatic fugitive searching for his daughter.

In the end, will they be enough to stop Nails and the chaos he has created?

This book is a little bit different from my usual reads and I’m so glad I gave it a go!
Set in an exaggerated but not altogether dystopian future, where people are ranked by social level – those in higher levels can get away with crimes and have access to better services that those in lower levels can’t, including murdering lower level citizens. Hence the ‘exaggerated’ part of my review… this crap is already happening, we just don’t have shiny bracelets to tell us which level we’re in.

As a part of this world, there is no communal police force. There are Enforcers, who would be more than happy to attend to all of your security needs… if you can pay. Which means that the lower levels that are more vulnerable to being victims of crime, can’t afford the protection.

Obviously there are people out there who like to keep things that way, like the man who is trying to legally buy orphans to stock up his brothels. This book is about how Julia, a lower level citizen, finds herself some friends and heroes to keep the children safe.
The chapters alternate between the POV of Julia, the sensible and compassionate one, and Tianna, the cheerful psychopathic one.

Unlike the last POV switching novel I read, I can honestly say that I enjoyed both of these character’s perspectives equally – they both complemented each other and the story perfectly. The writing style is a little bit too wordy for me but the story itself is perfectly planned out and is refreshingly original, with the perfect characters to back it up.

This book also had some excellent LGBT characters – I mention this because this is the first time I’ve read a book with LGBT characters that didn’t use it as a gimmick. In this case, their sexuality is just a fact and doesn’t affect the storyline in any way, which is how I feel it should be unless you’re reading a romance!

The only part I struggled with were the action sequences, which I felt went on for a little too long – I’m firmly in the ‘less is more’ camp when it comes to violence and action in books, but that’s just me.
This book is an excellent thriller with a superhero noir kind of tint to it – I really think this one’s going to be a crowdpleaser!