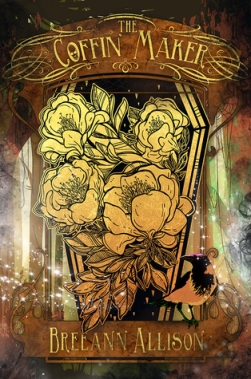 Twenty-three-year-old Jesse Burns lives a tranquil life as the coffin maker in the enthusiastically eerie town of Gregor’s Hollow. Here, the By the Pricking of My Crumbs Bakery sells deep-fried candy corn year round, and manmade mist swirls through the streets every afternoon at three-thirty. As for the graveyard bells that chime at midnight, and the Victorian portrait that materializes in the hotel guest rooms? Well, no one can account for those but they still look impressive in the brochure.

Few in the town are admired more than the trustworthy, if reclusive, coffin maker. Praised for his intricate carvings and flamboyant artistry, Jesse creates his masterpieces in the workshop that belonged to his father, the previous coffin maker who vanished nine years ago.

Jesse’s isolated routine is disturbed when Death appears on his doorstep one October evening. Wearing a sharply pressed suit and a condescending smile, Death demands eight coffins by Halloween. Jesse is horrified to learn that the coffins are intended for Death’s next eight victims—all of them citizens of Gregor’s Hollow. In exchange for the eight coffins, Death will tell Jesse what happened to his father.

Despite striking the bargain and starting work on the coffins, Jesse vows to save the Eight. But investigating a mystery is challenging in Gregor’s Hollow, the third most-famous Halloween tourist town in America. Home to horror enthusiasts and gothic fanatics alike, the town boasts a daily carnival of macabre spectacles, complete with ghostly sound effects in the streets, slasher chase scenes in the alleys, and a John Carpenter Orchestra in the park. Distinguishing staged horror theatrics from genuinely suspicious activity is impossible enough on an average day. But with the holiday approaching, the tourist season has just begun, forcing Jesse to conduct his detective work amidst the increased chaos of Hitchcock festivals, Edgar Allan Poe pageants, and monster movie reenactments.

Together with an alluring and untrustworthy stranger, he seeks the answer he needs to thwart Death’s plan.

I was seduced by the cover. I’m not afraid to admit it, so many Curiosity Quills Press covers seduce me…. I’m only human!

The story itself contained loads of my favourite elements but the writing style has to be the best thing about this book – we see everything through the eyes of Jesse, the young coffin maker in a weird and quirky town of Gregor’s Hollow. Good quirky, not annoying quirky. He’s likeable because he’s a genuinely good human being but has a tendency to bumble about trying to do the right thing in an impossibly difficult situation. The character development is top notch but the writing style itself is fun and always conjures up the right atmosphere for the scene.

This feels like a cosy mystery read, with the charm of a small town and really charismatic characters (the strong Gilmore Girls vibe was excellent) but with a supernatural thread running throughout that stops it getting too twee.

Jesse starts his sleuthing when Death, a snarky and enigmatic stranger, asks him to make eight coffins. It’s fascinating to read a murder mystery that starts before anyone is even killed, the suspense is amped up even more and you begin not only to suspect everyone of being a murderer but also of being a victim…

I enjoyed the ending of this book, the conclusion of the mystery was satisfying and there’s just enough intrigue left over to pick up the series again (I’m so happy to discover it’s going to be a series!), I can’t wait to get back to the weird Halloween town of New England and get know the locals better.