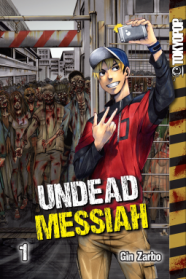 A pregnant woman is pursued by a supernatural creature. On the internet, videos of a bandaged hero surface. 15-year-old Tim Muley makes a terrible discovery in his neighbor’s garden. Three seemingly unrelated events, all of which seem to point to an imminent zombie apocalypse! But this time the story’s not about the end of mankind; it’s about a new beginning…

This book is manga format (this always catches me out when I see a colour cover!), so it’s meant to be read back-front, right-left, with black and white illustrations. You probably already know this but I’m uncultered as hell when it comes to graphic novels…

This is a fun read with beautiful artwork. Teenager, Tim Muley, is obsessed with zombie games and is convinced that he could survive the zombie apocalypse. Of course, the apocalypse then happens and we get to see him put his money where his mouth is! There’s some delightful violence, gore and twists and turns to keep you entertained. Things don’t pan out the way he was expecting though and this introduction to a series shows us that this isn’t going to be your standard zombie story, I can’t wait to see what happens next.

Sharky Malarkey follows the adventures of Bruce, a washed-up shark actor, and a colorful assortment of dysfunctional people, animals, and inanimate objects.

Bruce is equally outlandish and relatable—he’s vain but insecure; hotheaded but cowardly; craves attention but fears intimacy—his over-the-top antics are all too human. Based on Megan Nicole Dong’s popular webcomic, Sketchshark, her debut print collection mines the absurd in everyday life.

This is a collection of weird, wonderful and eccentric panel strips.
The book is split up into chapters, including Bruce the Sketchshark and his shenanigans, ‘Just Ladythings’ which includes a hilarious theme of ways in which men can be fooled by makeup, and an oddly touching story of racism and bigotry as told by a cartoon toad.

The humour was a bit hit and miss for me, but there were some real gems!

Goldilocks and the Infinite Bears: A Pie Comics Collection by John McNamee

Pie Comics began as a college comic strip way back is the mid ’00s, when flip phones roamed the earth. But it wasn’t until a shoulder injury forced John to simplify his drawing style and improvise the comics instead of actually sitting down and writing them that Pie Comics became the beloved strip it is today! This collection showcases some of the funniest and most trenchant of Onion writer John McNamee’s online comic strips, found at piecomic.tumblr.com.

Now this one tickled my funny bone – I love the illustration style and knew I would just from seeing the front cover. The sketches are concise and genuinely funny (sometimes a bit crude!) spins on parables and fairytales. 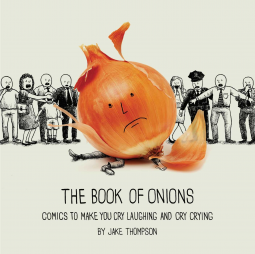 The Book of Onions by Jake Thompson

The Book of Onions is a collection of darkly funny comics from ake Thompson, creator of the celebrated bi-weekly webcomic “Jake Likes Onions.”

Ranging from the relatable to the utterly nonsensical and bizarre, The Book of Onions focuses on themes of loneliness, desperation, and failure. And misplaced optimism. And perverted talking fruit. Sort of like Gary Larson’s “The Far Side,” if Gary were way less accomplished and suffered from depression.

I don’t know how such bleak comics can be so funny, but here we are… this is a collection of surreal comics that employ a dark humour to make you chuckle. The illustration style is plain and easy on the eye, which somehow makes everything funnier. 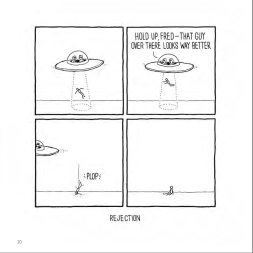