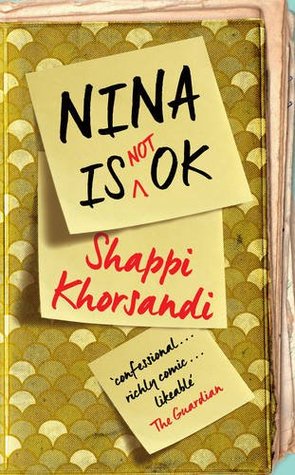 Nina does not have a drinking problem. She likes a drink, sure. But what 17-year-old doesn’t?

Nina’s mum isn’t so sure. But she’s busy with her new husband and five year old Katie. And Nina’s almost an adult after all.

And if Nina sometimes wakes up with little memory of what happened the night before , then her friends are all too happy to fill in the blanks. Nina’s drunken exploits are the stuff of college legend.

But then one dark Sunday morning, even her friends can’t help piece together Saturday night. All Nina feels is a deep sense of shame, that something very bad has happened to her…

**Thank you to Netgalley, the publisher and author for a complimentary copy of this title in exchange for an honest review**

Well f* me, this was a good book. It was funny, heartbreaking, devastating and so very, very real.

Nina is a fantastic main character. She’s a likable girl with problems she isn’t equipped to deal with, she’s very self aware and recognises when she’s acting like a brat or behaving in a self destructive manner, even if she can’t stop herself. Not least, she recognises that her growing drinking problem is a survival mechanism which is the reason it spirals out of control so quickly over the course of her school term.

Shappi Khorsandi deals with such a range serious and taboo subjects with delicacy, subtlety and a wry humour which keeps this book out of the realms of the traumatic. I don’t want to go into too much detail, but this book covers loss, substance abuse, emotionally abusive relationships and all manner of domestic horrors that we all know happen but never discuss.

One of the most touching parts of this book is Nina’s relationship with her little 5 year old sister, Katie. She loves her little sister with all her heart and no matter how low she gets, her sister is the one thing that keeps her going – this is the kind of reality in life that doesn’t always make its way into books.

Nina’s drinking takes a more serious turn after she finds herself being kicked out of a nightclub while …. erm ….. going down on a bloke by the bar. She doesn’t remember much of that night after that point but she knows that she’s crossed a line, after that point she loses control and ends up seeking treatment when she realises quite how far she’s gone. The treatment involves rehab and AA meetings, where she meets other people with similar problems but it doesn’t become one of those tragedy porn scenarios where we indulge in reading about other people’s troubles, which really earned my respect.

Nina has had a crap time of things and is expected to manage her own life now she’s almost an adult but she deals with it all with a great sense of humour and capability when she’s sober. She’s wise beyond her years and is going to grow up to be an amazing woman, this book is about hoping she survives her way to that point.
Despite being a work of fiction, this feels unbelievably real and worked its way under my skin. I feel like I know Nina personally and her suffering had me in tears, even if she couldn’t even feel her own pain at the time.

The writing style is refreshing, funny and very easy to read. It’s visceral and  packs a hell of a punch: when Nina receives a nasty text message from one of her friends, I felt physically ill. I’m definitely keeping my eyes open for more work from Khorsandi, she’s on my watch list now!

I would recommend this book to anyone with eyeballs, especially older teens but I suppose I should warn you that it comes with some pretty traumatic subject matter, including sexual assault.