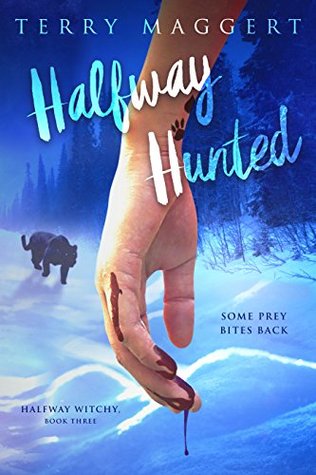 Some Prey Bites Back.

Welcome to Halfway; where the waffles are golden, the moon is silver, and magic is just around every corner.
A century old curse is broken, releasing Exit Wainwright, an innocent man trapped alone in time.
Lost and in danger, he enlists Carlie, Gran, and their magic to find the warlock who sentenced him to a hundred years of darkness. The hunter becomes the hunted when Carlie’s spells awaken a cold-blooded killer intent on adding another pelt to their gruesome collection: hers.
But the killer has never been to Halfway before, where there are three unbreakable rules:

1. Don’t complain about the diner’s waffles.
2. Don’t break the laws of magic.
3. Never threaten a witch on her home turf.

Can Carlie solve an ancient crime, defeat a ruthless killer and save the love of her life from a vampire’s curse without burning the waffles?
Come hunt with Carlie, and answer the call of the wild.

I love Carlie as a character and watching her grow as the series goes on is a real pleasure.

She’s grown a lot since the last book, she’s had her heart broken and lived the past year without the love of her life. I feel that this is a coming of age story in the making, Carlie and her Gran protect the town of Halfway from supernatural powers that seek to harm the residents. Carlie is becoming more independent as her powers grow and we can’t forget that her grandmother won’t be with her forever.  Eventually she will be the guardian of Halfway on her own, which is an interesting prospect.

My favourite thing about this book has to be Maggert’s writing style, he injects wit and an outstanding vocabulary into everything he writes. He gives Carlie a vibrant personality which also helps her cover up the real pain she’s been feeling since the loss of her giant Viking honeynbun, Wulfric, to the dark side.

‘He’s have to watch his back. Squirrels are sneaky. And mean. Basically, they’re adorable terrorists.’

Without giving away too much of the mystery, there are some nefarious Brits going around killing shapeshifters and storing their pelts. I’ve read of this premise in a few different books but it really strikes a chord with me every time.
As a species, we really are a bunch of bastards and if shapeshifters really did exist and I just know that there would be people who would hunt them for sport and provide some kind of bullshit argument as to why it was ok.

This book has seen Carlie grow in her power and make some very difficult choices about sacrifice and morality, for better or worse she has made her choices and there will be repercussions. The ending of this book is left on a bit of a cliffhanger regarding Carlie’s future but the author assures me that he’s working on the next installment so I’m hopeful I won’t lose my mind in the interval!