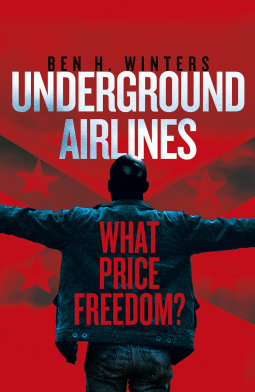 It is the present-day, and the world is as we know it: smartphones, social networking and Happy Meals. Save for one thing: the Civil War never occurred.

A gifted young black man calling himself Victor has struck a bargain with federal law enforcement, working as a bounty hunter for the US Marshall Service. He’s got plenty of work. In this version of America, slavery continues in four states called “the Hard Four.” On the trail of a runaway known as Jackdaw, Victor arrives in Indianapolis knowing that something isn’t right–with the case file, with his work, and with the country itself.

A mystery to himself, Victor suppresses his memories of his childhood on a plantation, and works to infiltrate the local cell of a abolitionist movement called the Underground Airlines. Tracking Jackdaw through the back rooms of churches, empty parking garages, hotels, and medical offices, Victor believes he’s hot on the trail. But his strange, increasingly uncanny pursuit is complicated by a boss who won’t reveal the extraordinary stakes of Jackdaw’s case, as well as by a heartbreaking young woman and her child who may be Victor’s salvation. Victor himself may be the biggest obstacle of all–though his true self remains buried, it threatens to surface.

Victor believes himself to be a good man doing bad work, unwilling to give up the freedom he has worked so hard to earn. But in pursuing Jackdaw, Victor discovers secrets at the core of the country’s arrangement with the Hard Four, secrets the government will preserve at any cost.

Underground Airlines is a ground-breaking novel, a wickedly imaginative thriller, and a story of an America that is more like our own than we’d like to believe.

**Thank you to Netgalley, the author and publisher for a complimentary copy of this book in exchange for an honest review**

This was a far more complex book than I’ve read of late. The synopsis is pretty comprehensive so you have a good idea already what goes down in this book.

Victor, the main character, is a very complex and not particularly endearing personality. It’s very difficult to tell whether this is part of the author’s plan or if it’s a lack of character development….
As a secret agent for the US marshals and a man with a horrific past, it’s more than likely that he’s deliberately created to be an enigma but I did find it quite hard to latch on to him as a protagonist, however, the supporting characters weren’t quite developed enough to compensate for this. As someone who really enjoys character driven books, this was a bit of a challenge (though totally worth it).

The pace of this book was good, balancing between the building of this world where slavery is still an important part of US industry, and the action.The book is written in the first person, so we see everything from Victor’s perspective, but Victor is something of an unreliable narrator – no one wants to think that they’re a bad person, so he twists a lot of things in his mind to shift the blame of his actions.

It was the world building and concept of this book which makes it stand out, exploring how different the world would actually be if the Civil War hadn’t happened and slavery was still considered acceptable – in the twenty first century, a lot of people would be opposed to it (thank fuck) but the moneymakers would find a way of providing a PR friendly face for it and making it seem justifiable for those who want to buy cheap merchandise.
The horror of this book was that the writing style was dispassionate. Victor is obviously opposed to slavery, as are a lot of the people he meets, but they all ‘know’ that it’s not something that they can change. Slavery just is.

At the end of the day, I’m still not sure how I feel about a book of this nature being written by a white author – I feel that it would have been a lot more insightful and compelling if it was written by someone who had actually experienced racism or had a better understanding of the horror of slavery. The dispassionate writing style is probably the most tactful way of dealing with this issue as a white author but it just didn’t make it as compelling a read as it could have been and, to be honest, left me feeling a bit uncomfortable like it wasn’t his story to tell.

For me, the appeal of this story was the concept rather than the style of writing. It’s thought provoking, disturbing and unlike anything I’ve ever read. I also can’t stress enough that there wasn’t anything wrong with the writing style, I just like my characters more passionate and engaging.