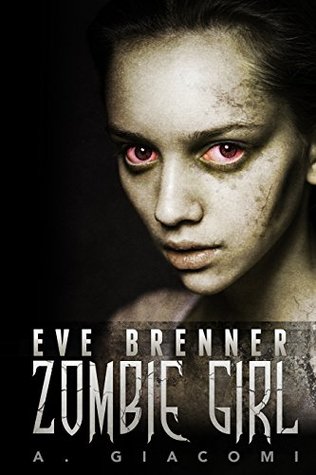 Eve used to be an ordinary girl, from an ordinary town, with ordinary dreams, but her dreams rapidly turn into nightmares when one grave mistake leaves her a little less than human and a lot less average.

Eve’s not quite the same girl she used to be. She desperately clings to her humanity as new desires, new abilities, and new urges take over with each passing day.

Eve Brenner: Zombie Girl is a tale that takes you on an emotional and terrifying journey as Eve struggles to cope with her new life and find a cure for her strange illness before time runs out. She desperately clings to her humanity as she tries to control the monster she knows is lurking inside her.

Turns out living was the easy part.

What a story! A student on an archeological dig is attacked when she goes poking around an old tomb in Egypt. Obviously it was some kind of zombie (clue’s in the title!) but it’s the kind that can be explained through science and magic.

Eve learns that everyone reacts different to this particular brand of zombie virus and is fortunate to discover that she has some control over her new impulses. Her two best friends, Cam and Alex are aware of her… condition and try their best to help her control it but it soon becomes clear that they’re out of their depth and we discover what happens when a zombie outbreak hits a small town university.

I adored the story, the mythology and the premise but I did find that the book had a wicked case of ‘debut novel syndrome’, the author hasn’t yet found her voice and confidence but I have no fear in following this series forwards – the storyline and characters are very strong, once Giacomi finds her unique style then there’ll be no stopping her and this series may well find itself a spot on one ofs my IKEA Billy bookcases!

The romance part of this book was a little cheesy, with a lot of longing glances and ‘she’s my world’… a bit overstated for my liking and could do with moving a little more towards the subtlety of describing the emotions and actions of the characters rather than a flashing billboard of teen emotion.

Eve is a fantastic and strong character, both physically and in personality. She starts kicking ass when the undead start attacking and the violence has the perfect level of gore, though I did giggle that a lot of the supporting characters must be walking around perma-concussed with the number of times they’re hit over the head and kidnapped.

This is going to be the YA zombie series to follow if you like mythology, government conspiracy and kickass girls. I can’t wait to read what happens next!