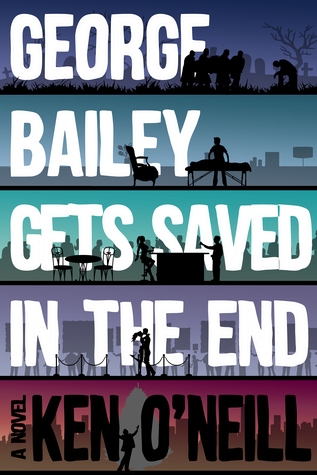 George Bailey, who has made a fortune selling Christmas ornaments, is having a rough few days. He’s thrown his back out lifting the Thanksgiving turkey; his father has died and his wife has left him. He’d turn to his best friend for support, but said BFF is having an affair with his wife.

On the heels of all this misery George meets a new woman, and he also meets Jesus (or perhaps just an awfully nice guy named Jesus). As he scrambles to hold together his floundering family, he must figure out if these strange and wondrous events  are miracles or symptoms of a nervous breakdown.

This book was a really tricky one for me to read without knowing for sure at the end that it wasn’t going to culminate in a really big religious message. I’m personally not a Christian, and I’m not a reader of Christian (or any other religious) fiction, so only once I was sure I wasn’t about to be tricked into a moral lesson did I really get into the book.

Christian faith does play a role in this book and the characters have varying degrees of faith which they do discuss – but it enhances the story and the characters. So, if you’re like me and are instantly turned off by religious stories – it’s ok. This is not what this book is about, you can read as much or as little as you like into the religious message so it works for those of faith too!

The appeal of this book for me is that it’s about people. It isn’t specifically a romance though it does play a part, I love that there are so many different characters and each one is complex and gloriously written. George (third of his name) is the main character, as the title may suggest, and he’s the perfect mix of neurotic, brave, cynical and hopeful. After his life goes down the shitter over a 24-hour period, he finds out that he really is capable of so much more than he’d resigned himself to and goes from simply going through the motions to taking control of his life and putting the needs of his family before his own. He meets Carolyn by chance on his first day as a bachelor and she helps him figure out what he’s been missing all these years, their relationship isn’t the centre of the plot and he doesn’t just lose himself to this new love affair, which makes him a better person in my opinion!

After that, I’d have to say that I love poor misunderstood Denis. We never get to learn that much about him but George changes his opinion of him grudgingly during the course of the book, which is sweet to read.

The author has wonderfully incorporated a range of LGBT issues, which are so skilfully written into the story that I only realised their full importance once I’d finished the book and was pondering the full scope of it. It includes a closeted relationship, a relationship between father and gay son and, at a distance, a woman rejected by her parents at the merest suggestion at her being gay.

O’Neill really does have a way with words; I giggled a fair amount throughout this book, where it’s very funny in places it’s also heart wrenching in others. I think it was the characters that had me hooked more than the story itself, which was a teeny bit too twee for my tastes (I’m not a Christmas or a family person by nature, and that’s essentially what this book was).

Every relationship in this book is so very real and relatable which is what makes the book so good. The author understands people and can demonstrate how interesting they are while keeping it subtle.

So fear not, if you’re looking for a Christmas time feel-good romance this year, I think you may have found it!

5 thoughts on “Review: George Bailey Gets Saved in the End by Ken O’Neill”