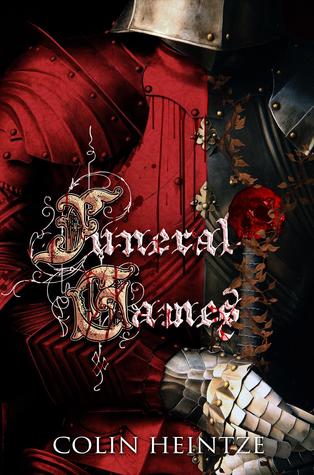 Ingerval is the Country of the Dead. Despised by the wider world, blighted by history, since the beginning of time it has honored one law: the Dead rule, and the Living submit. No one remembers why Ingerval nobles return as ghosts after their deaths. To enjoy a brief life of pleasure and plenty, followed by an eternity of reigning from beyond the grave, is the fate of all Ingerval lords. All but one.

As the youngest son of the King’s third wife, Syphax never thought he would amount to anything. He is content to live out a contemplative life free from the scourges of power and politics that infatuate his peers. But, after answering a summons to the Palace – a sprawling, ever-expanding repository for Ingerval’s ghosts – he finds himself at the heart of a dynastic struggle centuries in the making.

Funerals are happy occasions in Ingerval, and the King is planning for his to be the most decadent in the country’s long memory. He does not know that, unlike every lord before him, he will not return to rule alongside his ancestors. He will die the true death, sparking a succession crisis that throws the noble families into chaos. Amidst the violence and intrigue, Syphax alone asks, “What really happened to the King?” The deeper Syphax digs, the more he realizes these events are connected to others dating back to the founding of his father’s dynasty.

Dammit. I was lured in again by the spell of a beautiful cover and didn’t stop to check whether or not it was a YA.

In Ingerval, people with noble blood choose when they die so that they can be sure to leave behind attractive ghosts. Commoners die a true death and don’t linger around afterwards, which is a bit of a sore point for society.

Syphax, youngest prince of Ingerval knows that he will never become king so he spends his time following more academic pursuits and generally doing very little, content in the knowledge that it doesn’t matter to anyone what he gets up to. However, during his stay at the Palace for a funeral, he finds himself walking into one mystery after another which eventually unveils a huge political scandal.

The character development in this book was pretty poor, truth be told – Syphax isn’t a particularly strong main character and the supporting characters aren’t really able to offer enough to make up for this. Syphax starts to redeem himself by sticking up for the neglected ghosts and making sure that their quality of ‘life’ is improved in the areas of the Palace that no-one visits, but at the same time he’s pushed around by all of his peers and mocked by his love interest and her friends.

Later in the story we meet an obnoxious poltergeist called Ives, who somehow manages to flip from being a really nasty piece of work to a misunderstood antihero as soon as it becomes necessary for the plot to proceed.

Despite the incomplete characters and an excess of adjectives, this story really was based on an amazing premise. Heintze is very talented at the art of world building, creating a creepy atmosphere in the Palace of the Dead and showing us a world where death doesn’t create all people equal.

I reckon fans of YA and people less obsessed with character development will really enjoy this book, so get ready to spend some time in a haunted castle!