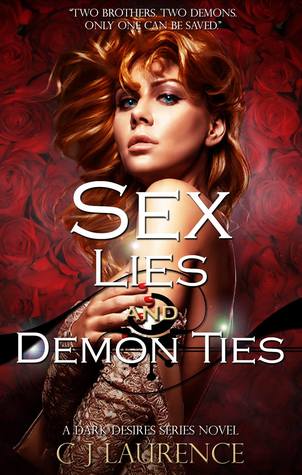 To be given one after an intense night of passion with a handsome stranger, your expectations grow with hope at this simple gesture. To him? The offering is his way of thanking you, a mortal woman, for allowing his dark being to indulge in forbidden sin…

If someone good can turn bad, then someone bad can turn good, right?

Two demonic brothers, Azazel and Balthazar have worked their jobs as Lucifer’s right-hand men for centuries. Cursed this way after their ghastly sins as humans, the ominous duo have left trails of devastation in their wake all over the world and all throughout history. Their curse can be broken by the true love of a mortal female, one who accepts all of their wicked deeds, but why worry about that when you have all the power and magick someone could ever desire?

Being evil, revelling in others misery and pain gets tiresome after a while. Or does it?

On their latest annual vacation from Hell, the bickering siblings stumble across Kyla Marshall, a feisty spice of life who captures both of their attention from the outset. With the two demons as opposite as yin and yang, Kyla soon finds herself being pushed and pulled on an emotional, frenzied ride of worldly secrets and shocking truths of human nature.

Caught up in the relentless whirlwind of the sinful brothers, Kyla soon finds her own curiosities and morbid nature creeping to the surface. The shadowed depths hiding within her terrify her very soul. But now this unknown part of her has been unlocked, can she ever really ignore it? And what terrible tragedies lay in wait for those in her way?

As a person who loves character driven plots, this book wasn’t for me.

The book tells the story of two demon brothers, spending their annual 3 month vacation from hell in Lincolnshire (of all places?!) where they both fall inexplicably in love with the fiery redhead, Kayla. She swears at them a few times, has sex with both of them then lives her happy ever after.

Though the synopsis of this book sounded exactly like the kind of thing I’d enjoy, in reality, it fell pretty short. The characters lacked depth and their behaviour was frankly bizarre. There was no kind of rational preamble to their sexual liaisons so it came across as seriously rapey, which is absolutely not my cup of tea. I prefer my sex scenes 100% consensual and without the use of magical coercion or cover up.

I’m aware that ‘dubious consent’ is even a category in Goodreads, but it’s one that I steer clear of if I don’t want my blood to boil in the bad kind of way while reading.

There were some dark and violent scenes in this book which I could have worked with, but without a strong groundwork behind them to provide context, they didn’t have quite the right impact on the reader. I like to understand the characters I’m reading about so I can understand their motives for everything they do, in this book they were over simplified and hit like a sledgehammer rather than the subtlety I would have preferred.

This book didn’t quite have a ‘finished’ feel to it, not least because the formatting for the Kindle was all over the place so there were about 3 lines to a page, but because the writing style was quite disjointed like large pieces of the plot were missing. This book had a lot of potential however those missing pieces were pretty crucial ones.

One thing that I do have to mention, however, for the sheer joy it brought me while reading this book was the sexual content.

A particular favourite was a reference to ‘her rising dampness’, at which point I wasn’t sure if we were talking about arousal or a plea for a dehumidifier…
‘He seated his lips upon her’ was another classic! It might have just been that my heart wasn’t in it at this point of the book, but the sex scenes did nothing for me.

All in all, I don’t think this is a series I’ll be pursuing but it hasn’t managed to put me off the genre of demon romances. It’s a weird niche but I like it!