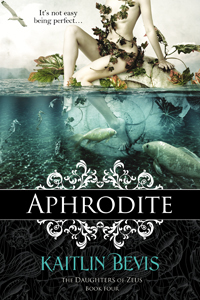 Being perfect isn’t easy, but Aphrodite is determined to live up to the ideal. So when Poseidon asks her to investigate strange happenings on several cruise ships, she jumps at the chance to prove herself. Demigods are going missing, and no one remembers them having been on board. Aphrodite charms herself into the best room on the ship, prepared to investigate in style. Unfortunately, the room belongs to the one man immune to her charm.
Adonis.
When Aphrodite realizes that he could be the next target, her investigation gets more complicated. Worse, whoever is responsible for the missing demigods charmed the passengers and armed them with long-forgotten weapons designed to kill gods. When the ship goes dark, Aphrodite and Adonis have to work together to discover who is behind the mayhem before Poseidon decides their ship, and every charmed and armed human on it, are more trouble than they’re worth.

This book ticked all the boxes for me. It was exceptionally well written, had really well developed and complex characters and was so intense that in some places I forgot how to breathe.

This is the fourth book in the series and given how many references there are to the history of the characters, I think that I would probably have benefitted from reading the previous books (I’m going to have to go back to them now to make sure they’re as good as this one!).
The general premise of the story is that pantheon of Greek gods are having a reshuffle following the defeat of Zeus and are trying to get their lives back in order. While this is going on in the background, demigods are disappearing and the gods have decided that it’s about time they start investigating what’s going on.

Aphrodite volunteers to go to the mortal world and investigate. This involves getting to know some of the demigods that the gods have estranged for millennia, dealing with divine politics and trying to heal from what can only be described as PTSD after the death of Zeus and everything he did to her.

It’s the psychology of this book that makes it so intense, Aphrodite experiences extreme emotions throughout the book as a result of the trauma she’s suffered and at times it’s really hard to read. Difficult, but worth it.

Of course, that’s not the only great thing about this book- the action sequences are also well written and play out naturally rather than coming across like a cheesy film scene. The suspense, action and characters are artfully written and altogether blew my mind.
There’s a degree of romance in this book, but I think it’s more about passion, kindness and support between beings rather than love and sex, which is what makes it so fascinating.

If, like me, you’re a sucker for any book that brings mythology to life – especially one that doesn’t gloss over how messed up that mythology is, give this one a read.