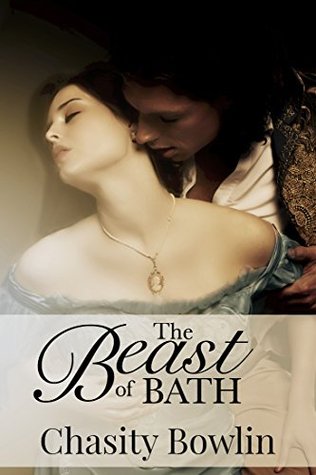 The Beast of Bath is a 30,000 word novella previously published in the Wicked Fairytales Anthology.

This is a pretty typical Beauty and the Beast trope novel – man with facial scars rescues a beautiful young woman who can see his inner beauty.

My god, this trope is like crack and it doesn’t matter how many variations of the story that I read or listen to, I don’t think I’ll ever get enough.

Lord Victor Norcross rescues a young woman he finds fleeing for her life in the dark of night, it all follows a slightly absurd path from that point on while he’s checking out her ass during their daring escape, marries her the next day and practices martial arts in his spare time. Absurd, but hey – crack.

Bowlin’s writing style is easy to read and gives you that comfy regency feel, that allows makes Lord Wandering-Eyes Norcross seem classy rather than unnecessarily lecherous. I think it’s safe to say that I’ll be scoping out some more of her novellas in future as a more complete introduction to the regency romance genre!

If you do chose to read this book, let me heartily recommend the audiobook version as the best way to enjoy the story! Lillian Yves is one of my favourite narrators and has a particular knack for romance and bringing characters to life, which complements this story perfectly.

As this story was set in Bath, UK, the characters were all British and Yves does a great job flipping between character voices and accents, as well as her own voice for the narration. It does get a little ‘fun’ near the end of the book when the accents briefly start sliding a little between different regions but they do stay close enough that it isn’t distracting. It’s also infinitely better than the cardinal sin I discovered last year…. a character driven story set in Leeds, done entirely in an American accent.
Her voice draws you into the story and keeps the suspense and intensity building throughout.

If you too are a sucker for fairytale retellings, I insist you drop what you’re doing for the next two hours and give the audiobook a listen! It’s the perfect length to listen to during a commute or while doing chores, but I heartily recommend having headphones about for the sexy bits if you don’t want other people to know what smut you listen to in your spare time…