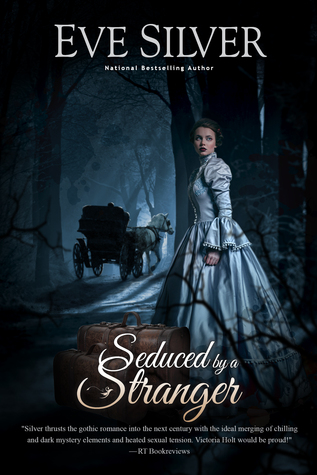 Destitute and desperate, Catherine Weston accepts the summons from her childhood friend Madeline St. Aubyn to attend her at Cairncroft Abbey, a place of secrets, lies and murder. Madeline’s health is in a poor state and she is terrified of her cousin, Gabriel. But Gabriel has quite a different effect on Catherine, stirring longings and desires she believed long buried.

Gabriel St. Aubyn is haunted by the horrors of both his past and his present, horrors he conceals behind a remote, unapproachable facade. He is drawn to Catherine, but is determined to protect her from the tragedies that yet have claws sunk deep in his soul.

Then a young woman is found dead, and Madeline’s ravings point to a link between this horrific crime and Gabriel—and Catherine must decide if he is a man worthy of her love or a sinister stranger determined to make her his next victim.

Note: All books in the Dark Gothic series can be read as stand-alone novels.

This book was recommended to me by a great friend and I after reading this, I can say that I will be trusting her judgement in all things, for the rest of time.

This book blew my mind and has me fully committed to the gothic romance genre. It had all of my favourite things in a totally absorbing novel  – a gothic setting, Jane Eyre-esque banter between characters and a whole load of family secrets involving suspicious deaths.

Catherine Weston is a woman who like to keep her personal life private, she comes across as cold to most people but she is very compassionate and has a strong sense of integrity in all things. So when her old school-friend, Madeline, who once saved her life asks her to come to her, she heads over without so much as a second thought.

Gabriel St. Aubyn shares a home with his cousin, Madeline, and is instantly intrigued by their new house guest. Both Gabriel and Catherine are deliciously complex characters with even more complex histories and scars that they must overcome, which is where the fun is in any romance!

It’s a book of two halves, the first half focusing on the budding romance and relationships between characters and the second half explodes with a completely unpredictable murder mystery. Eve Silver is a genius when it comes to creating a mystery and giving nothing away, even to us seasoned ‘I can totally guess what’s going on’ spoiler geeks. I had no idea how the story was going to pan out, even three quarters of the way in and I wasn’t disappointed with the ending when it all became clear.

The story is set in the 1800s and is told in an elegant and compelling writing style, Silver has nailed the line between authentic historical language and keeping it interesting for the modern reader. It feels like it’s been too long since I read a book that had the right balance in this regard so it was very welcome, I set up a blanket fort on my living room floor in the evening and sat with my nose in the book until  I was done.

As my friend can attest by the messages I was sending her every 20 minutes or so, I loved everything about this book.

My favourite messages would have to be:

‘34% in, dialogue is jawdropping, I have no idea what’s going on but I know I love it’

‘They have done the naughty sexy times! Wooooooooo’

Which brings me on to: The Sex Scene.

If you’ve read this book, you know which one I mean. It’s perfectly written (the word ‘nub’ is never uttered) and has made all of the tension leading up to this point worthwhile, and better yet – the book doesn’t just devolve into constant sex from that point on and give up on the plot, which is a pet hate of mine when a book is marketed as anything other than erotica. The mystery holds strong right up to the end and the tension doesn’t instantly dissolve just because they’ve seen each other naked.

I’m delighted to say that I’ve signed up to review Eve Silver’s Sins series and it appears that she’s an incredibly prolific writer so I’m going to be stocked up on excellent fiction for a long, long time!

4 thoughts on “Review: Seduced by a Stranger (Dark Gothic book 5) by Eve Silver”