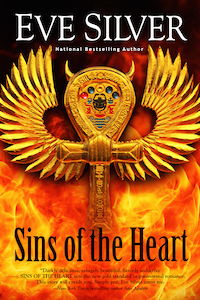 Dagan Krayl, the Underworld’s most powerful soul reaper, is the demigod son of the evil god Sutekh. He’s on a mission to find his murdered brother’s remains and resurrect him, but resurrection means that the secrets carried into death would be released and, with them, a war that could end gods and mankind alike.

Roxy Tam is searching for the same thing, but for completely different reasons. She means to make certain that the remains don’t fall into Sutekh’s hands, and that the soul reapers do not reanimate their fallen comrade. As a Daughter of Aset, Roxy is tasked with the protection of the human race, and if that means thwarting an all powerful soul reaper and making certain his dead brother stays dead, so be it. But when Roxy sees Dagan face-to-face, she realizes that she has met him once before—a meeting that changed her life forever.

Neither Dagan nor Roxy expects to join forces for the sake of mankind. Or to have their loyalties tested as they struggle against treachery, betrayal and the potent desire that threatens to consume them both.

Ever read a book that just made you say ‘YES’? This is one of those.

This is the second of Eve Silver’s books that I’ve read, but the first in the Sins series. To be honest, I probably wouldn’t have picked up this book just by looking at the cover (we’ve already determined that I’m shallow that way) and I would have missed out massively. Thankfully I already knew that Silver is a genius, so I went ahead and read it anyway.

This book is a fabulous contemporary romance set in a world of ancient Egyptian mythology.

Roxy and Dagan are destined to be enemies but from the moment they meet, they’re drawn to each other. Dagan is a soulreaper and the son of Sutekh, the soul eating god of the underworld.

Roxy is a woman who grew up in the foster system, she wasn’t abused but she suffered the mild emotional neglect being fostered often entails. She’s determined not to put herself into the position to be hurt emotionally again, which means that she wilfully misses out on a lot of experiences in life.

Dagan is a wonderfully complex character too, he has a very unusual family dynamic but his love for his brothers is really moving. Though the brothers have little to no reason to care about each other given how their father has done everything he can to pit them against each other, they seem to have an unbreakable bond.

This book was a very elegant balance between horror, mystery and romance. I was absolutely enraptured by Silver’s writing style and couldn’t bear to miss a single word – the romance between Roxy and Dagan is so intense. I enjoyed knowing that they were certain to get together, it was just a question of when and how hot it was going to be.

The romance isn’t overpowering in this novel, similar to Seduced by a Stranger, the storyline doesn’t unravel once the main characters have seen each other naked. If anything, it ramps it up another notch.

The violence is blood curdling and doesn’t pull a single punch, the darkness is what makes the sex and romance pop. Hearts are torn out, literally and figuratively, and souls fed to demons. This is what I look for in a series and I suspect that soon this series will replace the Anita Blake series in my heart.

I just couldn’t get enough of the political intrigue and conspiracy in this novel, the rest of this series promises so much if the cliff hanger is anything to go by.
This book is the perfect choice for any fans of intense thrillers, mythology and hot and steamy romance.