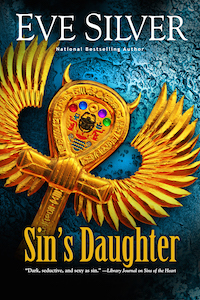 Cursed with immortality, driven into a nomadic life on the fringes of society to escape those who hunt her, Amber Hale has learned the bitter lesson that she can never grow close to anyone. Never love.

Only once did she break her own rules. And her lover, Kai Warin, paid for her mistake with his life. For decades, she’s been numb with grief. Now, confronted by a soul reaper—an agent of one of the most powerful of the Underworld deities—with Kai’s face, she must acknowledge the likelihood that he betrayed her…to the Lord of Evil himself.

Forced into an uneasy alliance and plagued by the unwanted yearning between them, they must work together to elude the dark forces hunting them both…

This novella was exactly what I needed after dragging myself to the end of a long and dry political high fantasy novel.

The soul reaper in question, Kai, is one of the supporting characters in book 3, Sins of the Flesh and it’s sweet to see that the single hunks of the Underworld are finally being paired off to their soulmates (oh the irony!),

The plot of this book is very fast moving and satisfying, the only thing that I would have wanted more of is the heroine’s relationship with her father. We’ve seen romantic and fraternal relationships so far in this series, it’s time to see the women relating with men who aren’t their lovers!

The perfect palette cleanser after reading something dry, with uninspired characters. Eve Silver wins the day again with her likable characters that you can instantly latch on to and share their feelings, this is the reason I can’t stop going back to her books time and time again! I’m less anxious than I would otherwise be, knowing that I’m almost at the end of the Sins series… for the sole reason that I know there are other series by Silver for me to sink my teeth into.

This is going to be a short review for a short book – I don’t think that you need to have read the rest of the series to fully enjoy this book. In fact, I think this installment might even be the perfect taster for readers new to the urban fantasy genre. If anything is going to sell you on the concept – this will be it!