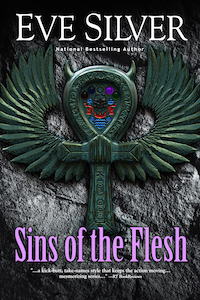 The blood of the Underworld lord of evil runs through soul reaper Malthus Krayl’s veins. Raised to fight for survival and to kill for victory, he can destroy anyone who poses a threat. As he searches for the one responsible for his brother’s murder, he refuses to succumb to any distraction…until his sworn enemy crosses his path and tempts him beyond all reason.

Calliope Kane, a Daughter of Aset, has a personal hatred for soul reapers. Their savage attack against her family still haunts her. But only Malthus can help her find the traitors of her kind, and only she can help him hunt the source of betrayal amongst the reapers. As they unite, the danger grows closer…and the passion between them ignites.

This series is just getting better and better with each installment. Anything that Eve Silver writes from this point on, I’ll read. If she writes ingredient lists for the back of a new breakfast cereal, I will read it. If she writes a full blow-by-blow account of paint drying: I. Will. Read. It.

This time it’s Mal, son of Sutekh that’s finding himself a strong woman to call his very own. Sure, it’s getting a little formulaic that one brooding supernatural male is finding himself a badass woman to give his heart too and that may at some point become boring, but not yet!

The badass woman in this instance is Calliope Kane, mentioned in Sins of the Heart as Roxy Tam’s mentor. I hadn’t considered her as a likely love interest for this series given her hatred for soul reapers, but that’s something that’s actually dealt with in this story. Calliope isn’t my favourite heroine in this series (3rd of 3 as it happens) but Mal may be my favourite of the brothers, he doesn’t have the same anger issues or possessiveness as his brothers but seems to be more practical and reserved when it comes to forming new relationships.

This book was considerably more plot centric than the last, which not only drew me back into the main conspiracy but also raised the ante for sexual tension. I’m firmly in the camp for delayed gratification when it comes to literary sexy times, it gives the reader more time to get to know the characters and their motivations so that by the time they finally get down to it, it’s just that little bit more satisfying.

In this installment of the Sins series, Eve Silver reminds me how good she is at creating suspense and intrigue. This time round we learn more about the hierarchy of the Sisters of Aset, before all the characters we’ve met thus far are thrown together. I can’t say that the final reveal was completely unexpected, but it was so satisfying that I don’t care.

Again, the most wonderful things about the relationships between the Krayl brothers and their mates is that all the relationships are built on respect, even if they are a little feral when it comes to protecting them from the dangers that come with being connected to Underworld royalty.

I can’t freaking wait to read the next book in the series, which is going to be an unknown quantity now that one side of the conspiracy has been resolved! I’m hoping that the romance side is going to be different this time for the sake of variety, but I know that the action side of things is going to be fantastic.