I was a bit skeptical when I picked these up – I wasn’t sure if this was going to be one of those cringeworthy attempts to make classic literature ‘trendy’ and ‘cool’ for the youth of today.

Frankly, I think that book don’t deserve the title of ‘classic’ if nobody can bear to read them – they’re just ‘formerly popular’. That said, I don’t think that any of these three titles that I picked have reached the end of the road yet – they’re perfect for a remake with fresh media.

My verdict? Manga is a good choice for these books. The tone and illustrations were appropriate to the stories, there were some bits cut out of the stories but nothing too heretical, in my opinion.

The first thing that struck me was how funny this version is – at first my reaction was ‘This is a classic! It’s not meant to be FUNNY!’… then I realised that it really was. This story has always been tongue in cheek, but this time it was with hilarious manga illustrations of Mrs Bennett’s temper tantrums. As in, I was giggling like a lunatic levels of hilarious.

Of the three, this book had the most liberties taken with the storyline but it still worked, it cut out some of the subtleties about Mr Wickham’s rakishness and made Lizzie more of a ball busting heroine.

By simplifying and abridging the dialogue in this story, I think it makes it far more accessible for readers who don’t want to get too into it.

My final thought? Is there an anime version yet?! I’m dying to see it in animation.

This is the story I’m least familiar with of the three, having only read it the once – so I can’t really remember enough of the subtleties to know how many liberties have been taken with the narrative.
I may be wrong but I think that the identity of Pearl’s father was given away sooner than it was in the book, but this helped the rest of the book make sense. Hester’s love and devotion for her daughter over all other things was really moving and  the illustrations were more reserved than Pride & Prejudice.

I really enjoyed this format – it didn’t feel dumbed down at all, it was just another way of telling a timeless story. 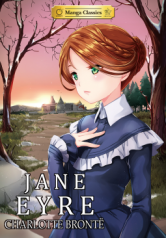 Here we go: my favourite story in all the world. I’m a huge adaptation snob when it comes to this book, seeing as it gets picked up every 5 years or so and repackaged.

What did I think? It absolutely did the story justice. It barely cut out a thing apart from some of the conversations between Jane and Mr Rochester, my only quibbles are that the fortune seller scene didn’t make any sense at all in this version and Mr Rochester was even illustrated too handsome… but that’s just me being pedantic.

Each chapter of this adaptation ended in a cliffhanger, which would be ideal for study groups taking it a chapter at a time.

I would have loved to see this in colour, to satisfy my own tastes but it’s a thumbs up from me!