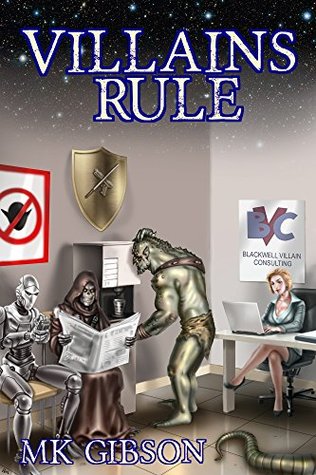 Yes, I am talking to you, the reader of the this book’s description. It’s rude not to answer a person when they ask you a question. OK, I get it, 4th wall breaking is overdone. Get over it. This book, Villains Rule, is a fantasy action-comedy which you have to read. Not because it redefines the genre, far from it. But rather for what it contains. A villain’s tale.

How often do you get to read a story where the villain is the protagonist? No, not an anti-hero, or a brooding monster, nor a hero thinly disguised as a villain. And not evil. If you want evil, take that nonsense to therapy. No, I mean a villain’s villain. The ones who use their power because they can, while morality is only a philosopher’s complex.

This is the story of Jackson Blackwell, the Shadow Master and the top villain adviser. Sadly, even the top villain occasionally gets double-crossed. Trapped in one of the fantasy realms, Jackson has to use his skill and wits to exploit the rules, points out the genre flaws, undermine godly authority, and win the day.

Because, that is what villains should do, shouldn’t they? Read this book, have a few laughs, and find out.

This book was a breath of fresh air – it’s completely different to anything else I’ve read lately and has rekindled my interest in fantasy novels.
The story is told in the first person, from the perspective of Jackson, a.k.a. the Shadowmaster. He’s delightfully snarky, arrogant and prone to the odd monologue.
This book made references to all of the great hero/villain tropes and cliches, this is the kind of self awareness that goes perfectly with a sarcastic main character! It’s very ‘Deadpool-esque’ in its way but without being a total rip off.
The story itself took many twists and turns that were completely unpredictable, which was at odds in a book about cliches! It’s so cleverly done that it was impossible to know how it was going to go right up until the end – this is the ultimate book for fans of superhero stories in any form, it picks up on all the best bits and mocks them mercilessly. Above all else, this book was hilarious. I had several laugh-out-loud moments while listening to this book.
Jackson is a brilliant main character, he’s very clever and you’re never sure if he’s good/evil/playing an angle/indifferent – he makes it clear that he’s a villain, but that it doesn’t mean he’s evil.
The author isn’t too high any mighty to seize the opportunity for a good dick joke or a Star Wars reference, which earnt him nothing but brownie points from me!
I listened to this book on audible, narrated by Jeffrey Kafer. To begin with, I wasn’t too sure about his approach as his voice was completely deadpan and a bit lacking in the expression department… a little further into the first chapter and I realised it was Jackson’s voice rather than the narrator’s. Once you get to know the character a little better, it makes sense to voice him that way so stick with it- and the narrator had a great variation when it came to the other characters.
This is the perfect book for your sci-fi and fantasy nerds out here – it’s something a little different which managed to be an homage to an entire genre while still having its own complex and enjoyable story.