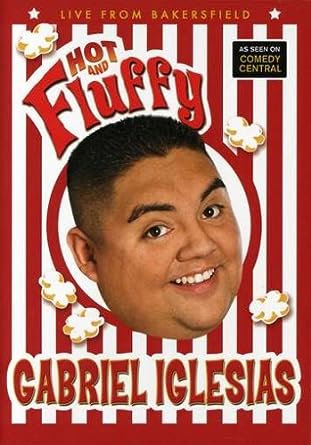 When I first found a Hot and Fluffy on Netflix a while back, I watched it all the way through…. called my best friend (now fiance) and demanded he come over so we could watch it together.

Since then, Fluffy has been a comedy staple in our household (after we got a household for him to become a staple in. Up til that point we just sent each other youtube clips every day) and when Facebook told me he was performing in Manchester it was a no-brainer: we were going.

For the record – my new idea of hell is driving through Manchester city centre on a concert evening with a GPS that gives you instructions about half a second after you pass the turn off.

So, after a quick snack to fend off the hanger and stress of exploring a 2 mile square of Manchester over the course of 20 minutes, we grab a drink and go find our seats. The place was PACKED and let me tell you: heat rises. We were sat in the circle upstairs and we were sweltering the entire thing – given the chance again, I’d be keeping a couple of bottles of ice cold water to hand. Some poor girl in our row had to leave before the end before she keeled over and I can’t say I was too far behind.

For me, the best thing about Fluffy is that as he says, he isn’t out to offend anyone. He still has plenty of adult references and swearing aplenty (wooooo! Sex, drugs and krispy kreme!!!) but he keeps things pretty light, which was why the half hour introduction by Alfred Robles was unexpected.

The poor bastard might have just been suffering the wrath of my hanger and heat stress  but I don’t feel like he was a good fit for the show, especially given that his set included a lot of dark jokes about dead/disabled/abused kids and various gags about cheating on girlfriends. I have a pretty twisted sense of humour but the tone of this just wasn’t right given who we’d all come to see.

But then Fluffy came out…

It feels less like a comedy show and more like hilarious storytime. I’ve seen a couple of other big-time comedians but none of them managed to draw me so much that an hour and a half didn’t feel like long enough! His delivery is what makes his stories so perfect, even sat at the back and staring at the back of a skinny guy’s balding head I could see everything he was telling us.

Almost the entire show was made up of new material and I have no idea how the man keeps everything so fresh after 20 years – it was amazing. The last 10 minutes or so was dedicated to some older stuff, which ended in a round of Comedy Karaoke while the audience joined in on the classics.

At the very end… the poor, eternally embarrassed Baby Fluff (a.k.a. Frankie) got to join Fluffy on stage to have ‘Happy Birthday’ shouted at him by a few hundred slightly drunk Brits. Happy Birthday buddy!