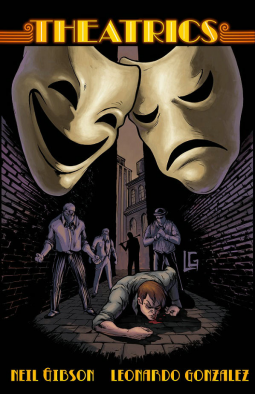 Rudy Burns is living it up in 1920s New York. He has good looks, a rich girlfriend and a thriving Broadway career. One night stumbling out of a speakeasy he gets attacked and loses everything. But it’s what Rudy chooses to do next that makes the story. The results are quite theatrical…

This is the promising first volume of what I know is going to be an amazing series. Set in the 1920s during prohibition, a heart throb actor is attacked outside a speakeasy and has to rearrange his life after having his face disfigured.

The illustrations are dark and atmospheric and complement the story perfectly. Even though the story hasn’t got anything particularly original to offer at this stage, the characters and the art work pull you in and have you desperate for more. Even though this is only the introductory stage, the characters are well developed and have so much to offer the story as it progresses, there’s a conspiracy in the making and you can’t help but be suspicious of people’s motives for the actions in this novel- I for one will be following the series and investing in the print copies as soon as the full collection is available.

In a world that already hates and fears them – what if only Black people had superpowers. After miraculously surviving being gunned down by police, a young man learns that he is part of the biggest lie in history. Now he must decide whether it’s safer to keep it a secret or if the truth will set him free. Collects issues 1-6.

Wow. This comic blew my mind.

Think X-men but set in the world as we know it, especially the nastier parts of this world like entrenched racism. Only in the world this comic describes, 0.5% of black people have superpowers.

This story explores the different reactions to that and has a lot of anger and hope in it, which is why I enjoyed it so much. Emotion is the one thing that this series doesn’t lack.

The main character is a black teenager who has just discovered his powers and has a very uncertain future ahead of him, he has some very adult decisions to make and so far he’s facing them like a champ.

The artwork is black and white, which I love. The characters are diverse and beautiful (I grew up reading Asterix, need I say more why this matters to me?). The language and story immerse you into this world completely, this is a series well worth following for its originality and storytelling power.