These two handsome gents are the newest addition to the Most Sublime household – former farm cats that had been bought and, within 8 hours, handed over to a rescue centre because they weren’t miraculously tame and child friendly. Funny, cos it sounds like they bought the cats then threw them at children… how could that possibly have gone wrong?!

They’re 6 months old, adorable and don’t answer to John and Jeff (those are their names though).

After a couple of days of sweet talking the sofa, where they’d parked themselves and refused to come out for anything other than food and a convincing looking fish on a piece of string, they’ve finally decided that we’re not so bad after all.

At one with the sofa and a foam roller

I can’t believe how rewarding it is to see them coming from terrified and cowering to walking around the house and acting like they own the place. They’ve been unbelievably well behaved so far and… if you believe it…. use the cat tree. I bought and assembled an expensive cat tree and they actually use every part of it!

Jeffy (white markings) has turned out to be a cuddlemonster and is already starting to ask for attention whereas John has yet to let us touch him, but is happy to play with his toys out in the open and has started playing a game called ‘hide 2ft away and stare at Nia’, he wins if I wet myself. 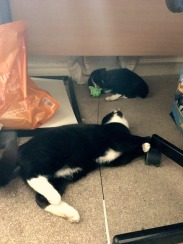 Frankly, I’m just writing this to brag about my new reading companions and why I’ll never be able to leave a cup of tea unattended again.

In the spirit of bragging about pets – it’s your turn! Who are your reading buddies?

2 thoughts on “Reading buddies and Most Sublime Kittehs”